Test of a Natural elbow MTA

James is an active member of the British boomerang society, he is also a very active boomerang maker..

Here is his interview.

ABC: James, who are you?

JH : My name is James hoy born 1/9/1970, I'm husband father of 8 children and grandfather to 6 grandchildren. I'm a shopfitter an house builder /boomerang maker from Wallasey in the north of the UK between wales and Liverpool

ABC: James, How is boomerang in UK  ? We can see very active throwers and builders , but also, maybe very few ..

JH : Theres a number of other makers in the UK so boomerangs are very easily available  to purchase like Jay Butters, Adam McLaughlin, Martin Lasslet and of course, there's ebay but be careful what you buy not all return .

ABC: how did you discovered boomerang ?

JH : I was given a boomerang from Australia in 1977 a Bill Onus it wouldn't work for me I put it on my shelf as ornament
Then in the summer if  79 my friend asked if we could take it out for a throw I said it doesn't work it's rubbish ..it flies out but doesn't return
We took it out my friend threw it and it worked, mmm, so i try again it flew straight out and landed up a tree
That night lying in bed looking at it I had an epiphany,  this  must be right handed an I'm left handed ...
So next morning i searched my father's shed for plywood and a saw no plywood unusual as my father is a carpenter, so i went to my room and cut a square out of the back of my wardrobe  and then put the clothes back to hide the hole  from my mother ...
I copied the Bill Onus in the mirror  so i knew it would be a mirror image I took it to the feiLD behind our home and it bloody worked brilliantly so it began right there and then .
I now make lots of types of boomerangs from various materials and sources .

JH : I make striplaminated boomerangs  as I'm a big fan of al Gerhards  and John Cryderman .

ABC: Do you throw several times a week ?

JH : I throw as often as possible every weekend sometimes for 6 to 7 hours LD throwing and in the lighter days, after work for an hour or two twice maybe 3 times a week wind permitting.

We have a great selection if big fields in Wallasey my favorite is 350m x 360m virtuallya huge square feiLD flat as a pancake with no wind obstructions I.e trees buildings near by to disrupt the breeze it's half a mile from the beach so clean fresh winds mainly westerly direction .

JH : I  love to collect elbows from UK forests and have a shed full of different varieties of English hardwoods.
But I like to use aircraft grade plywood  and G10 epoxy glass.

JH : My biggest boomerang hero is of course herb smith I love old school LD boomerangs and heavy weighted
I also have a love of making and throwing long distance .

JH : My favorite of all has to be the Oscar Cuartas omega from his own throwing bag his personal boomerang gifted to me by Dara Cuartas.

JH : My best memory was sitting in kiel and seeing so many famous boomerang makers and throwers and names I'd only read about and the great reception I got from them I felt I had truly been found or found myself apart of it the boomerang family and the following year I took manuel Schütz and Gunter Moller and his family gold prospecting in north wales it was for me a really amazing time to be around such great boomerang hero's of mine .

ABC: An idea of how many boomerangs you made ?

JH : I have made in the region of maybe 10 000 boomerangs over the years maybe a lot more I don't know for sure I make at least 2 every evening ..

ABC: An idea of how many boomerangs you have in your collection ?

JH : I have quite a lot of boomerangs in my personal collection,  a lot of Herb Smith wooden and paxolin. Most of herbs models, quite a few Volker Berhens and also quite a few Al Gerhards striplams.
I own in the region of 500 to 600 boomerangs.
I given over 400 boomerangs away as gifts to get people into the sport and I strive always to introduce newcomers.

Thank you James for this interview ..

Here are a few pictures of James process to create Striplaminated boomerangs .. 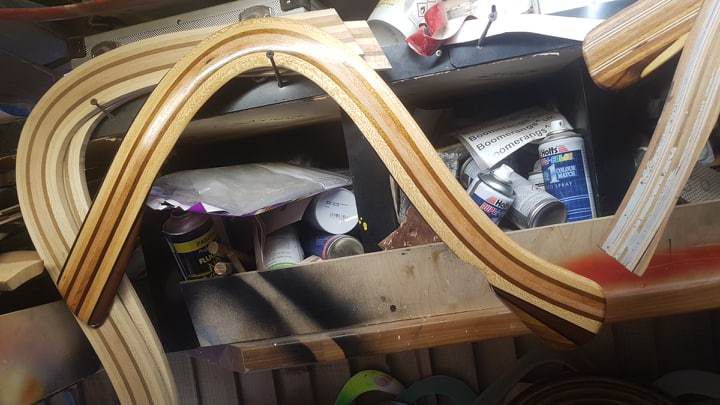 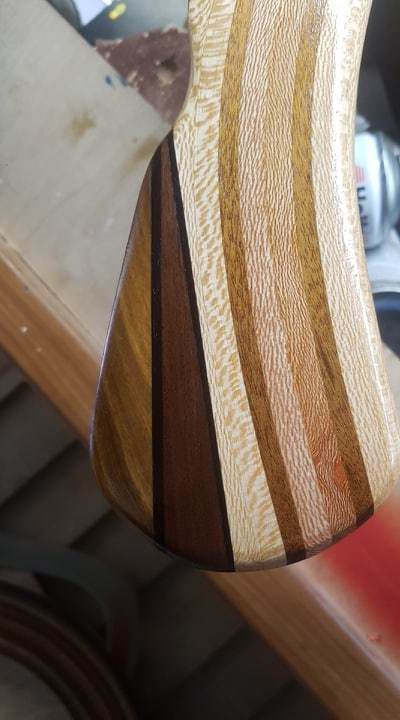 Can you imagine all the steps to get this result ??? 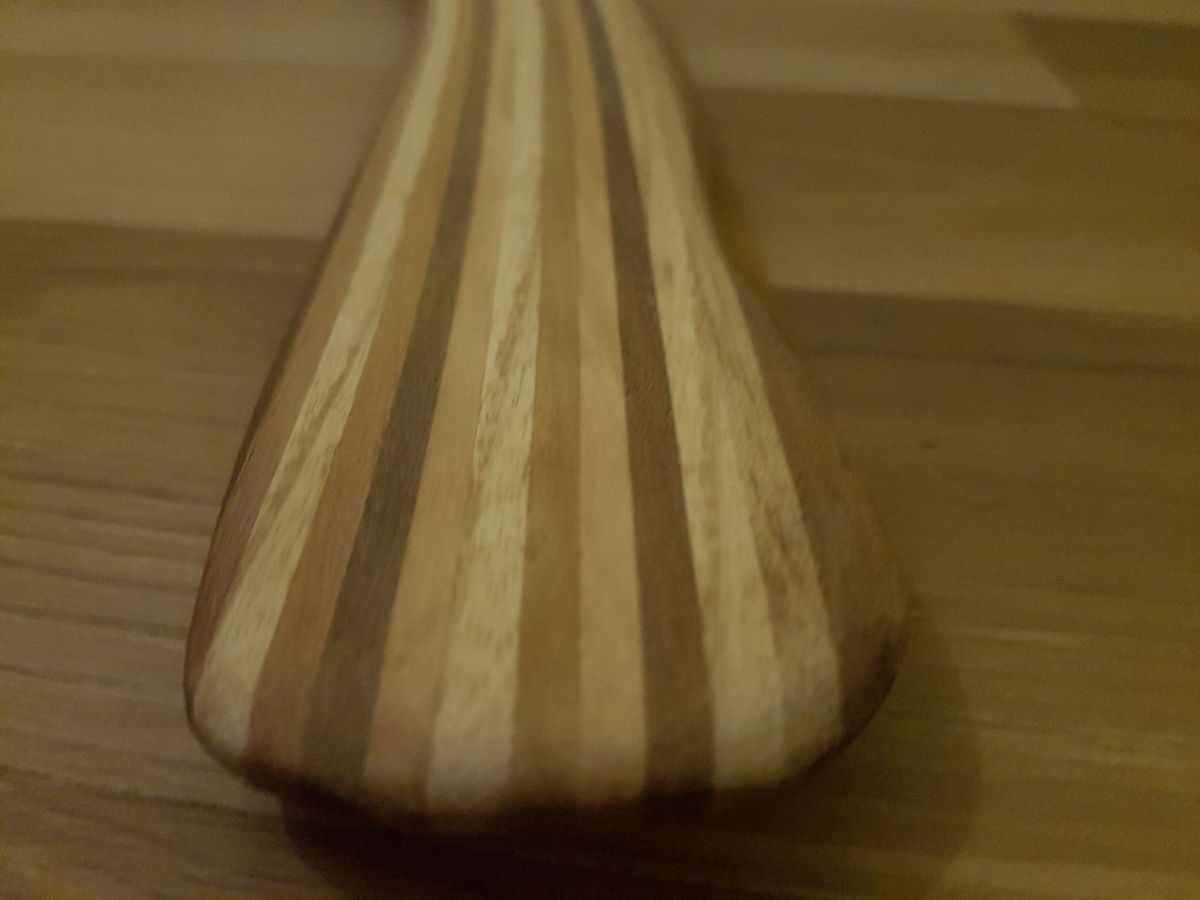 Did you also bought a LD in polypropylen ??

This boomerang is particular, it is a MTA, yes, but unique, as each tree is unique, this boomerang is the only one... James made hundreds of kilometers miles accross the country to pick up nice elbows..

Then he had to cut them , make the dry, cut them once again, profile them, varnish , and then say good bye to theses pieces of art ...

Size, weight, thickness are on the pictures.. Thickness is changing .. 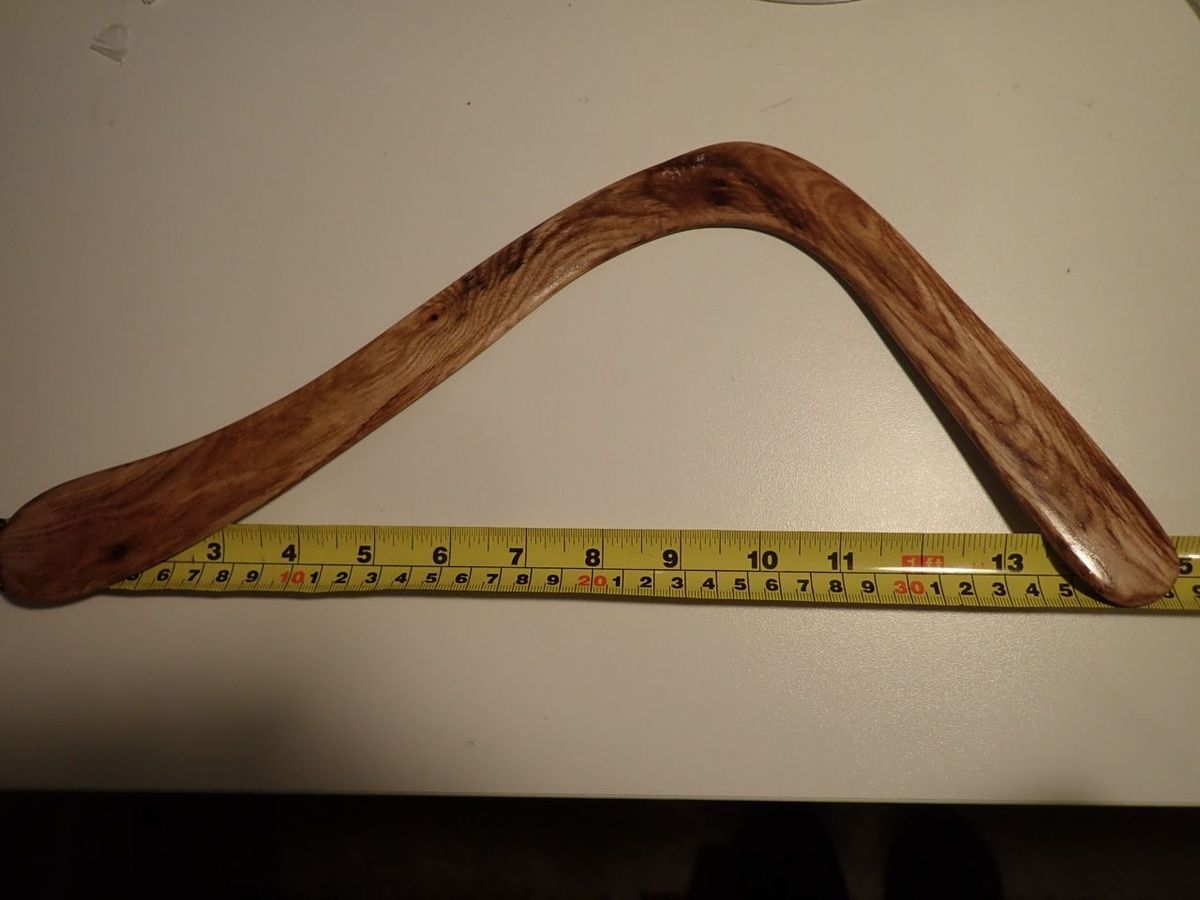 the material is Oak from Aberdeenshire.

First, you may not want to throw at all ..

I saw many MTA lost in the air, in trees, so there is still a chance to have a bad throw and have your boom broken or lost after a several minute flight ..

But if it does not flies, is it a boomerang ???

if you decide to throw, do it  high and vertical ...

I would say : check the tune and do not try to make miracles, it is not a paxolin one...

I choose not to tune it as i did not want to take the risk of breaking it.

boomerangsuk Home of Hand Crafted Boomerangs Large or small, Right or left handed, For all levels and ages.

I had a few throws, some with a catch outside the camera, some with no catch .. i did not want to make a lot of throws as each throw is a risk of loosing or breaking this MTA.

Thank you James for this unique boomerang which is also a real MTA..